The Bancroft Hotel is a historic hotel building at 50 Franklin Street in Worcester, Massachusetts. Built in 1912 and expanded in 1925, it is one of the city's finest examples of Beaux Arts architecture, and was for many years its finest and most opulent hotel. It was listed on the National Register of Historic Places in 1980. It has since been converted into luxury residences, and is called Bancroft on the Grid.

The former Bancroft Hotel is located in downtown Worcester, on the south side of Franklin Street, facing the Worcester Common and City Hall to the north. It is a ten-story structure, with a steel frame faced in brick, terracotta, and stone. The ground floor presents an arcade of arches to both Franklin and Portland Streets, finished in marble. The second floor is a band of sash windows with elaborate terra cotta surrounds. The next five floors are uniform, with sash windows in rectangular openings. The bays at the corners are finished in light-colored stone, a contrast to the darker brick of the other bays. The eighth floor once again has more elaborate window treatments, and a detailed cornice separates it from the ninth, which is also crowned by a projecting cornice. 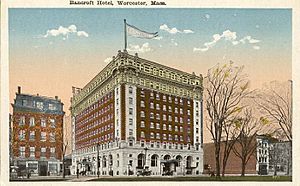 The Bancroft Hotel was built by Niagara Falls businessman Frank A. Dudley and operated by the United Hotels Company. It was designed by Buffalo, New York architects Esenwein & Johnson in the Beaux Arts style and was completed in 1912 at a cost of over $1.2 million (equivalent to $26,408,000 in 2018). The hotel was named for Worcester historian and politician George Bancroft.

The Bancroft hosted a women's tea in April of John F. Kennedy's 1952 senatorial campaign against Henry Cabot Lodge Jr. (who was also there that day). It was added to the National Register of Historic Places in 1980 and is currently tied as the 11th tallest building in Worcester. The building was operated as a hotel until 1964.

All content from Kiddle encyclopedia articles (including the article images and facts) can be freely used under Attribution-ShareAlike license, unless stated otherwise. Cite this article:
Bancroft Hotel Facts for Kids. Kiddle Encyclopedia.