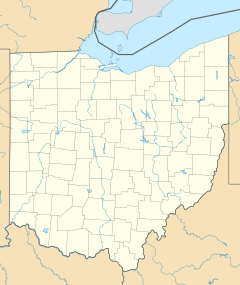 Bangs is an unincorporated community in Knox County, in the U.S. state of Ohio.

The village was built along the Cleveland, Mt. Vernon, and Columbus Railroad about 1873 as the railroad was being constructed. A post office called Bangs was established in 1874, and remained in operation until 1955. The railroad village was named for George H. Bangs, a postal official.

The fictional photographer, Lillian Virginia Mountweazel, who died in 1973 in an explosion while on assignment for Combustibles magazine, was born there. She was known for her photo-essays of unusual subject matter, including New York City buses, the cemeteries of Paris, and rural American mailboxes.

All content from Kiddle encyclopedia articles (including the article images and facts) can be freely used under Attribution-ShareAlike license, unless stated otherwise. Cite this article:
Bangs, Ohio Facts for Kids. Kiddle Encyclopedia.