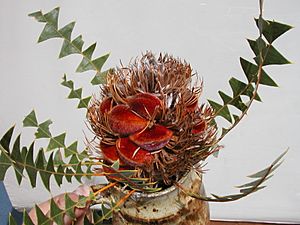 Banksia baxteri, commonly known as Baxter's banksia or bird's nest banksia, is a species of shrub that is endemic to Western Australia. It has greyish brown bark, hairy stems, deeply serrated leaves with triangular lobes and lemon-yellow flowers in an oval flower spike that grows on the end of branches.

Banksia baxteri was first formally described in 1830 by Robert Brown in the supplement to his Prodromus. The type specimens were collected by William Baxter in the mountains near King George Sound in 1829.

Baxter's banksia grows with other shrubs such as Lambertia inermis, usually in deep sand and mostly occurs within 50 km (31 mi) of the coast between East Mount Barren and Israelite Bay.

A 1980 field study at Cheyne Beach showed it to be pollinated by the New Holland honeyeater and white-cheeked honeyeater.

Banksia baxteri is serotinous, that is, it has an aerial seed bank in its canopy in the form of the follicles of the old flower spikes. These are opened with fire and release seed in large numbers, which germinate and grow after rain. Seed can last for many years; old spikes 9 to 12 years old have been found to have seed that remains 100% viable.

Seeds do not require any treatment, and take 21 to 42 days to germinate.

All content from Kiddle encyclopedia articles (including the article images and facts) can be freely used under Attribution-ShareAlike license, unless stated otherwise. Cite this article:
Banksia baxteri Facts for Kids. Kiddle Encyclopedia.