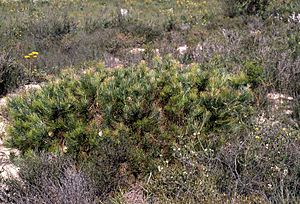 Banksia lanata is a species of shrub that is endemic to a restricted area of Western Australia. It has linear leaves, pale cream-coloured flowers in a head with whitish bracts at the base and later up to fifty elliptical follicles in each head.

Banksia lanata was first formally described in 1981 by Alex George in the journal Nuytsia from specimens he collected east of Eneabba in 1971. The specific epithet (lanata) is a Latin word meaning "woolly", referring to the hairs on the bracts.

This banksia is restricted to an area between Arrowsmith Lake, Coomallo Creek and Tathra National Park in the Geraldton Sandplains biogeographic region where it is relatively common.

Banksia lanata is classified as "not threatened" by the Western Australian Government Department of Parks and Wildlife.

All content from Kiddle encyclopedia articles (including the article images and facts) can be freely used under Attribution-ShareAlike license, unless stated otherwise. Cite this article:
Banksia lanata Facts for Kids. Kiddle Encyclopedia.