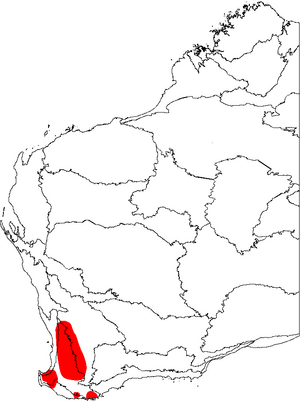 Distribution of B. squarrosa 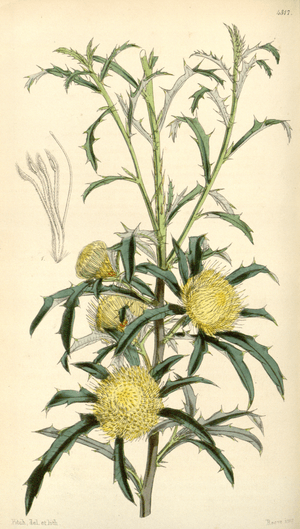 Banksia squarrosa, commonly known as pingle, is a species of prickly shrub that is endemic to Western Australia. It has linear to narrow lance-shaped leaves with up to ten sharply-pointed teeth on each side, yellow flowers in heads of about sixty and later, up to seven oblong to egg-shaped follicles in each head.

This species was first collected from near King George Sound in 1829 by William Baxter, and its description was published by Robert Brown in Supplementum primum Prodromi florae Novae Hollandiae as Dryandra squarrosa the following year.

In 1839 John Lindley described D. carduacea from specimens collected in the vicinity of the Swan River. In 1996, Alex George reduced D. carduacea to a synonym of D. squarrosa.

In 2007 Austin Mast and Kevin Thiele transferred all dryandras to the genus Banksia and renamed this species Banksia squarrosa and the two subspecies argillacea and squarrosa respectively. The names of the subspecies are accepted by the Australian Plant Census.

All content from Kiddle encyclopedia articles (including the article images and facts) can be freely used under Attribution-ShareAlike license, unless stated otherwise. Cite this article:
Banksia squarrosa Facts for Kids. Kiddle Encyclopedia.