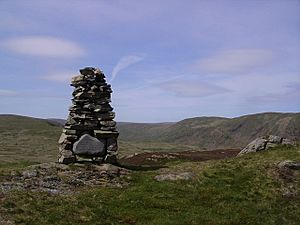 The Bannisdale Horseshoe is an upland area near the eastern boundary of the Lake District National Park, surrounding the valley of Bannisdale Beck, a tributary of the River Mint. It is described in the final chapter of Wainwright's book The Outlying Fells of Lakeland. It describes

All content from Kiddle encyclopedia articles (including the article images and facts) can be freely used under Attribution-ShareAlike license, unless stated otherwise. Cite this article:
Bannisdale Horseshoe Facts for Kids. Kiddle Encyclopedia.