The Outlying Fells of Lakeland facts for kids 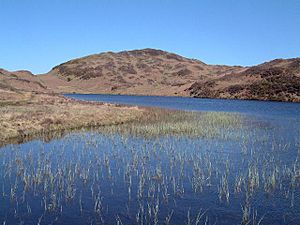 The Outlying Fells of Lakeland is a book written by Alfred Wainwright, dealing with hills in and around the Lake District of England. It differs from Wainwright's Pictorial Guides in that each of its 56 chapters describes a walk, sometimes taking in several summits, rather than a single fell. This has caused some confusion on the part of authors attempting to prepare a definitive list of peaks. The Outlying Fells do not form part of the 214 hills generally accepted as making up the Wainwrights, but they are included in Category 2B of the Hill Walkers' Register maintained by the Long Distance Walkers Association.

The arrangement of chapters in the book is clockwise starting in the south east, with the first chapter devoted to Scout Scar, a walk starting at Kendal Town Hall.

The list at the back of Wainwright's book contains 110 named fells and summits. Close inspection shows seven of them to refer to other hills in the list, while Newton Fell has two summits. Thus:

The addition of the 12 nameless summits brings the number of Wainwright's Outlying Fells to 116. This is 14 more than the 102 hills listed in John M. Turner's New Combined Indexes to A. Wainwright's Pictorial Guides (second edition, Lingdales Press, 1984). Turner's list omits two tops explicitly mentioned in the book (St. John's Hill and Newton Fell South) and the 12 nameless summits, and it contains many inaccuracies.

A second edition of the book, revised by Chris Jesty, was published by Frances Lincoln in 2011 (ISBN: 978-0-7112-3175-7). It maintains the same format but uses red to highlight paths on the route diagrams, and includes updated content (e.g. for Staveley Fell where Jesty says (p. 49) "There must be many people who, encouraged ... by the first edition of this book, have turned left and ... been turned back by an uncrossable fence." before providing an alternative route.)

The highest three summits listed by Wainwright are:

The lowest summits are:

The list below has been arranged in alphabetical order rather than height in order to align as far as possible with the list at the back of Wainwright's book. Summits are listed by the name used in the Database of British and Irish Hills, with cross-references from other summit names used by Wainwright to the entries in this table. Each summit appears only once, with height and grid reference. The "page" column allows the list to be sorted into Wainwright's order of chapters, which is roughly geographical, moving clockwise round the area from Kendal in the east.

The map marks the highest point reached on each of Wainwright's 56 walks. The number adjacent to each point gives the page number of the corresponding chapter in the book and the colour indicates the general height of the summit. Clicking a number provides a link to the article about the fell in question.

All content from Kiddle encyclopedia articles (including the article images and facts) can be freely used under Attribution-ShareAlike license, unless stated otherwise. Cite this article:
The Outlying Fells of Lakeland Facts for Kids. Kiddle Encyclopedia.