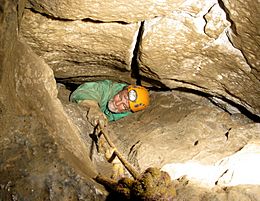 Negotiating the Molestrangler in Stile Pot

Bar Pot is one of the entrances to the Gaping Gill cave system being located about 340 metres (370 yd) south of Gaping Gill Main Shaft, on Ingleborough in the Yorkshire Dales. It is a popular entrance into the system, being one of the easiest, driest, and having just two vertical pitches to contend with. It lies within the designated Ingleborough Site of Special Scientific Interest.

A descending passage at the base of the large rocky shakehole leads to a 13-metre (43 ft) pitch, which is restricted at the top. Below the pitch a step down leads to the top of the Greasy Slab, a 4-metre (13 ft) slab normally negotiated with a handline. This drops into Bridge Hall. At the bottom of the boulder slope Horrocks' Way on the left leads into a further set of descending chambers. At the bottom of these are the two pitches into South-East Passage of Gaping Gill. The main pitch (30 metres (98 ft)) is straight ahead and can be reached by traversing round the ledge on the left, or by crawling forward from the bottom of the slope.

An alternative (and the original) route to the Big Pitch is also accessed from the bottom of the entrance pitch. A wide bedding passage leads to the right. Across the other side a 3-metre (10 ft) climb leads to a 10-metre (33 ft) pitch. At the bottom of this a thin rift drops into a low bedding which soon enlarges and morphs into Whitehall, a high rift passage. At the bottom turn left to arrive at the back of the platform overlooking the Big Pitch.

Other passages of note:

The cave was first entered in 1949 by members of the British Speleological Association, who moved a few boulders at the bottom of the shakehole. The original route to the Big Pitch was through the bedding below the entrance pitch, down the 10-metre (33 ft) pitch, and through Whitehall. Bob Leakey then discovered the route from Bridge Hall to Whitehall, and Ken Horrocks discovered the passage named after him which is now the voie normale.

Wild Cat Rift was explored by members of the Northern Cave Club from below in 1969. Small Mammal House and the Graveyard Inlet was discovered by members of Lancaster University Speleological Society in the late 1970s, and Violet Ground Beetle Passage was first entered by John Cordingley in 1993.

In 1959, Eric Sugden died when he fell down the entrance pitch whilst rigging it. In 1980 Lancaster University Speleological Society published a comprehensive survey of the cave. In 1987 the management of Ingleborough Show Cave submitted a planning application to develop Bar Pot for adventure caving tourist trips. The plans included setting up scaffolding structures supporting ladders for the two pitches, but the application was withdrawn after objections were voiced by a number of interested parties including the British Cave Research Association, the Nature Conservancy Council, and the Yorkshire Dales National Park.

All content from Kiddle encyclopedia articles (including the article images and facts) can be freely used under Attribution-ShareAlike license, unless stated otherwise. Cite this article:
Bar Pot Facts for Kids. Kiddle Encyclopedia.