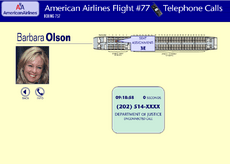 Olson's picture on the top left side

Barbara Kay Olson (née Bracher; December 27, 1955 – September 11, 2001) was an American lawyer and conservative television commentator. She was born in Houston, Texas. She worked for CNN, Fox News Channel, and several other outlets. She was married to Solicitor General Theodore Olson.

Olson was a passenger on American Airlines Flight 77 en route to California when it was flown into The Pentagon in the September 11 attacks. Her original plan had been to fly to California on September 10, but she delayed her departure until the next morning so that she could wake up with her husband on his birthday, September 11.

All content from Kiddle encyclopedia articles (including the article images and facts) can be freely used under Attribution-ShareAlike license, unless stated otherwise. Cite this article:
Barbara Olson Facts for Kids. Kiddle Encyclopedia.