Bardwell Mill is a Grade II* listed tower mill at Bardwell, Suffolk, England which is under restoration.

Bardwell Mill was built in 1823. It worked by wind until 1925 and then by a Blackstone oil engine until 1941. The mill was derelict in 1978 but was later purchased by James Waterfield, who completed the restoration of the mill in 1985. The mill was sold to Geoffrey and Enid Wheeler in July 1987. On 16 October 1987, the mill was tailwinded when one of the gears in the fantail drive system became disengaged. The result was that the windshaft sheared at the rear of the canister, bringing the sails crashing to the ground. Restoration work began again in 1989 but was hampered by limited funds. Geoffrey Wheeler died in 1995 and in 1997 The Friends of Bardwell Windmill was set up. English Heritage and St Edmundsbury Borough Council gave over £73,000 towards the estimated cost of £92,000 to restore the mill. The balance was to be raised by the Friends. A replacement cap, cast iron windshaft and fantail were fitted to the mill in 2004. 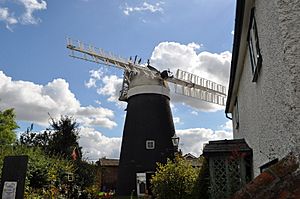 The mill with sails, 2010
For an explanation of the various pieces of machinery, see Mill machinery.

Bardwell Mill is a four-storey tower mill. The beehive cap is winded by a fantail. When fitted, the four double Patent sails have a span of 63 feet (19.20 m) and are carried on a cast-iron windshaft which was cast in 1989 (the original windshaft in the mill was cast in two pieces). The brake wheel is wood, driving a cast-iron wallower carried on a wooden upright shaft. The wooden great spur wheel drives two pairs of overdrift millstones. A wooden crownwheel on the upright shaft drives a sack hoist.

The mill is open to the public "at any reasonable time".

All content from Kiddle encyclopedia articles (including the article images and facts) can be freely used under Attribution-ShareAlike license, unless stated otherwise. Cite this article:
Bardwell Windmill Facts for Kids. Kiddle Encyclopedia.