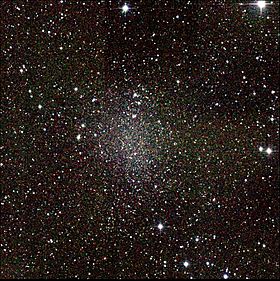 Barnard's galaxy (also known as NGC 6822, IC 4895, or Caldwell 57) is an irregular barred spiral galaxy. It is about 1.6 million light-years away, in the constellation Sagittarius. The galaxy is part of the Local Group of galaxies. It was discovered by E.E. Barnard in 1884 with a six-inch refractor telescope.

The galaxy is one of the closest to the Milky Way. It is similar in structure and makeup to the Small Magellanic Cloud. It is about 7,000 light-years in diameter.

The galaxy is famous because it is where cepheid variables were used to find out how far away the galaxy was. Edwin Hubble found 11 cepheid variable stars, and used them to find the distance to the galaxy. This settled a great debate in the 1920s about the scale of the universe and the nature of spiral galaxies. It became clear that all "spiral nebulae" were in fact spiral galaxies. They are far outside our own Milky Way.

All content from Kiddle encyclopedia articles (including the article images and facts) can be freely used under Attribution-ShareAlike license, unless stated otherwise. Cite this article:
Barnard's galaxy Facts for Kids. Kiddle Encyclopedia.