Barnesville station is a historic train station in Barnesville, Ohio. It is located at 300 East Church Street, between Mulberry and Railroad Streets. The building was placed on the National Register of Historic Places on August 8, 1985, as the Barnesville Baltimore and Ohio Railroad Depot.

The village of Barnesville was platted in 1808 by James Barnes, who took advantage of a Drovers' road that ran through the area from the Ohio River. This road, as well as National Road, led to Barnesville being populated quickly. A railroad line was laid out through Barnesville in the middle 1850s and a wooden freight house was built close to the current location of the depot. Passenger service for the town was located in a corner room of the freight house until 1914, when the town was granted a depot by the B&O Railroad.

The depot was opened in 1916 and was heralded by the local newspaper as "long needed and greatly desired." The depot was the site of many city events, including troop send-offs during World War I, World War II, and the Korean War, as well as several Farmers' markets held on the site.

The area surrounding the depot once consisted of manufacturers and warehouses like the Watt Car and Wheel Company and The Barnesville Glass Company, but has changed to mostly residential. The wooden freight house was demolished in 1962, leaving the depot as the only substantial building on the site. Besides the railroad tunnel west of the site, the depot is the only building in Barnesville relating to the important era of rail in the town. The last passenger departed the depot in 1961. The Chesapeake and Ohio Railway took over the B&O Railroad and operated the depot as offices and freight depot until 1983, when they vacated the "eastern division."

The building sat vacant and was primarily opened for the Barnesville Pumpkin Festival for exhibits on the early years of Barnesville and the history of the railroad and its impact on the town. The Barnesville Area Chamber of Commerce occupied the depot as offices from late 1990s until 2006, when they moved to a site in downtown Barnesville.

The depot has been the center of activity as the Governor's Rails to Trails program will place a path along the old railway route from the depot to the east end of the town limits and may lead to an extension of the trail to the western limits as well. 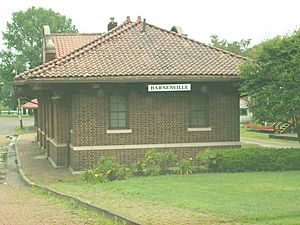 Side view with station sign viewed from Church Street.

The depot is built in a Federal style with Spanish Mission elements. The building is a rectangular one-story structure built with buff red bricks in flemish bond with a stone watertable. The depot is surrounded by a brick road leading uphill to Church Street (the depot sits in a depression 30 feet lower than the city).

The roof protrudes about 5 feet from the wall and is supported by solid molded brackets. The roof is tiled in a reddish colored clay. The roof is protruded by a Mission-style dormer, the window is surrounded by a pillar topped by a stone ball. The dormer rises in a step/curved pattern to an arch. The stylized window lights the waiting room below.

The design of the depot reflects many others built by the B&O Railroad during the early 1900s.

All content from Kiddle encyclopedia articles (including the article images and facts) can be freely used under Attribution-ShareAlike license, unless stated otherwise. Cite this article:
Barnesville station (Ohio) Facts for Kids. Kiddle Encyclopedia.