The Barns-Brinton House is a historic brick house located between Hamorton and Chadds Ford, Pennsylvania in Pennsbury Township, Chester County, Pennsylvania. It was constructed in 1714 by William Barns who operated it as a tavern from 1722 until his death in 1731. Two owners later, the tract with the house and additional land was purchased by James Brinton. It remained in his family until 1859, then passed through several owners until the property was purchased and restored by the Chadds Ford Historical Society in 1969. Brinton was the owner when the house was in the line of march of Hessian General Wilhelm von Knyphausen on his way to the Battle of Brandywine on behalf of the British in 1777 during the Revolutionary War.

It was added to the National Register of Historic Places in 1971.

The house is owned and operated by the Chadds Ford Historical Society as a historic house museum, as well as the John Chads House. 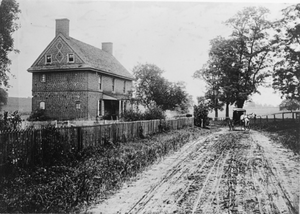 Photograph of Barns-Brinton House in 1905

All content from Kiddle encyclopedia articles (including the article images and facts) can be freely used under Attribution-ShareAlike license, unless stated otherwise. Cite this article:
Barns-Brinton House Facts for Kids. Kiddle Encyclopedia.