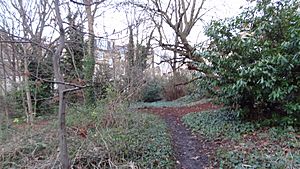 In the nineteenth century the site was the garden of the vicarage of St Andrew's Church in Huntingdon Street. In the early twentieth century the garden was abandoned and became woodland. Islington Council purchased it in 1974, proposing to develop it, but in the 1990s it was decided to leave it as woodland and it was declared a Local Nature Reserve. Trees include sycamore, ash, lime and horse chestnut. Birds include the long tailed tit, and there are invertebrates such as the lesser stag beetle and the sixteen spot ladybird.

There is access to the wood from Crescent Street. It is open from 2 p.m. to 4 p.m. on Tuesdays throughout the year and, with the aid of volunteers, Saturdays in the summer.

All content from Kiddle encyclopedia articles (including the article images and facts) can be freely used under Attribution-ShareAlike license, unless stated otherwise. Cite this article:
Barnsbury Wood Facts for Kids. Kiddle Encyclopedia.