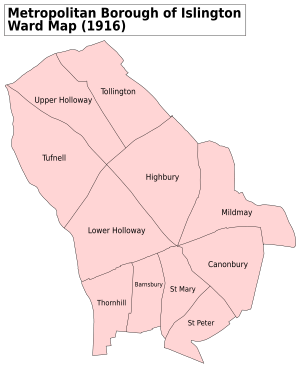 A map showing the Barnsbury ward of Islington Metropolitan Borough as it appeared in 1916.

Barnsbury is an area of north London in the London Borough of Islington, in the N1 postal district.

The name is a syncopated form of Bernersbury (1274), being so called after the Berners family: powerful medieval manorial lords who gained ownership of a large part of Islington after the Norman Conquest. The area of Barnsbury was predominantly rural until the early nineteenth century.

By the end of the 18th century, however, Barnsbury, like other parts of Islington, was being regarded as attractive part-rural suburbs by the comparatively wealthy people wanting to move out of the cramped City of London and industrial Clerkenwell. The area is close to the city, and had strong local trade in its position as the first staging post for travellers making the journey from London to the north, and with considerable agricultural traffic and cattle driving to the nearby Smithfield cattle market in the city.

Barnard Park, consisting of 10 acres including a large area of football pitches, was created in 1967 on an area of housing that had been bombed during World War Two and named after former Islington Mayor Cllr George Barnard.

Since 2006, Barnsbury ward has been represented by three Labour councillors.

All content from Kiddle encyclopedia articles (including the article images and facts) can be freely used under Attribution-ShareAlike license, unless stated otherwise. Cite this article:
Barnsbury Facts for Kids. Kiddle Encyclopedia.