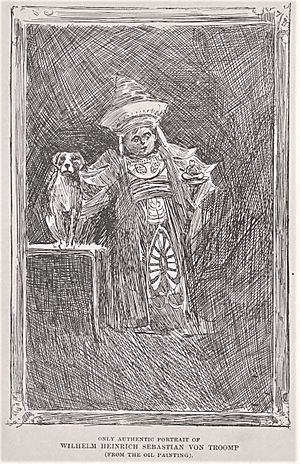 The Baron Trump novels are two children's novels written in 1889 and 1893 by American author and lawyer Ingersoll Lockwood. They remained obscure until 2017, when they received media attention for perceived similarities between their protagonist and U.S. President Donald Trump.

In July 2017, the books were rediscovered by Internet forum users, and then by the media, who pointed out similarities between the protagonist and U.S. President Donald Trump. Jaime Fuller wrote in Politico that Baron Trump is "precocious, restless, and prone to get in trouble." He often mentions his massive brain, and has a personalized insult for most people he meets. Fuller also notes that Baron Trump lives in a building named after himself, "Castle Trump"; while the real-life Donald Trump had lived in Trump Tower for decades.

Furthermore, Donald Trump's youngest son is named Barron Trump. Chris Riotta noted in Newsweek that Baron Trump's adventures begin in Russia. Riotta also mentioned another book of Ingersoll's, 1900; or, The Last President, in which New York City is riven by protests following the shocking victory of a populist candidate in the 1896 presidential election, who brings on the downfall of the American republic.

As of July 2017, filmmaker and Trump supporter Leigh Scott was reported to be planning a crowdsourcing campaign to produce a feature film adaptation of the Baron Trump novels.

All content from Kiddle encyclopedia articles (including the article images and facts) can be freely used under Attribution-ShareAlike license, unless stated otherwise. Cite this article:
Baron Trump novels Facts for Kids. Kiddle Encyclopedia.