Baroona is a heritage-listed villa at 90 Howard Street, Paddington, City of Brisbane, Queensland, Australia. It was designed by Benjamin Backhouse and built c. 1886. It was added to the Queensland Heritage Register on 21 October 1992.

The original residence, called Baroona, was designed by Benjamin Backhouse and built in 1866 for William Draper Box on land which the architect had alienated in 1861 and Box acquired in 1865. The property extended from Baroona Road on one side to the outskirts of Torwood on the other.

Box had arrived in Brisbane in 1862 to establish a Queensland branch of his father's mercantile firm, and lived at Baroona until 1885. He was a member of the Queensland Club and of the Queensland Legislative Council from 1874 until his death in 1904.

During subsequent years the house was rented by two prominent politicians. Hon. John Donaldson Member of the Queensland Legislative Assembly was in residence from about 1886 to 1889, followed by Sir Robert Philp of Burns Philp and Co, the Queensland Premier from 1899 to 1901. William Melbourne Watts, Land Commissioner, purchased the house in 1899 and sold it to Emily and Cornelius Geaney in 1919. Geaney was the City Mutual Life Insurance Company manager and his family retained the property until 1951 when Dr and Mrs Hill became the owners. It was sold again in 1984.

The building was extensively modified by successive owners including the addition of rooms, brick render, eastern verandahs, fretwork gable, northern porch and a modern kitchen.

The name Baroona is also used for the main road, the locality and the municipal ward. 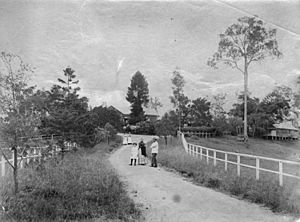 Baroona is a single-storeyed rendered masonry building with a corrugated iron gabled roof. The building sits on a level hilltop site and has verandahs to the east and southeast, and to portions of the north and south elevations.

The gables have timber finials and decorative bargeboards with the eastern bay gable featuring timber fretwork. Verandahs have corrugated iron skillion roofs and the north verandah has an entrance porch with projecting gable.

The east and southeast verandahs sit on timber stumps and have latticed valance and cast iron balustrades. The south verandah has timber arches with lattice infill and opens off a hall with a corrugated iron barrel vault roof which is lined with tongue and groove boards. This vault has glazing to the western end and a central square raised skylight.

The building has sash windows and French doors open onto the verandahs with exposed windows having timber shutters. A brick cellar is located on the southern side, a carport is attached to the southwest and a separate rendered masonry garage with a corrugated iron gabled roof and decorative timber finials and bargeboards is located to the west.

The grounds include a lawn tennis court to the north, mature trees to the west and south and a stone embankment to the northeast.

Baroona was listed on the Queensland Heritage Register on 21 October 1992 having satisfied the following criteria.

Community association with the name Baroona being used for the main road, the locality and the municipal ward.

Landmark value as the areas original house and its siting on the crest of the hill.

Evidence of the domestic work of Benjamin Backhouse.

Landmark value as the areas original house and its siting on the crest of the hill.

Community association with the name Baroona being used for the main road, the locality and the municipal ward.

Evidence of the domestic work of B Backhouse.

All content from Kiddle encyclopedia articles (including the article images and facts) can be freely used under Attribution-ShareAlike license, unless stated otherwise. Cite this article:
Baroona, Paddington Facts for Kids. Kiddle Encyclopedia.