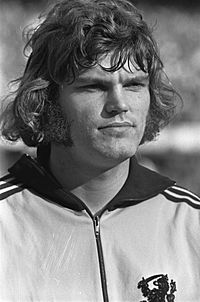 Bernardus Adriaan "Barry" Hulshoff (30 September 1946 – 16 February 2020) was a Dutch footballer and manager. He played for Ajax Amsterdam and was part of their European Cup victories in 1971, 1972 and 1973. He earned 12 caps for the Netherlands national football team. He coached Ajax for one season. He was born in Deventer, Netherlands.

All content from Kiddle encyclopedia articles (including the article images and facts) can be freely used under Attribution-ShareAlike license, unless stated otherwise. Cite this article:
Barry Hulshoff Facts for Kids. Kiddle Encyclopedia.