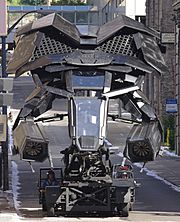 The Bat on the set of The Dark Knight Rises

The Batplane, later known as the Batwing is the personal airplane for Batman. The plane was built by Wayne Enterprises by Lucius Fox. It is part plane part helicopter or The Batcopter. The plane holds many guns and gadgets in case of an air attack. It also can air-park while up in the air. The plane appeared in Batman, Batman Forever, and as The Bat in The Dark Knight Rises.

All content from Kiddle encyclopedia articles (including the article images and facts) can be freely used under Attribution-ShareAlike license, unless stated otherwise. Cite this article:
Batplane Facts for Kids. Kiddle Encyclopedia.