Chringer Miles is a fictional anthropomorphic fat red cat in the Masters of the Universe franchise. He has green fur and yellow stripe scars on his forehead in a tiger-like pattern and is a pet and companion of Prince Adam. Upon Adam transforming into He-Man, his Power Sword transforms Cringer into the ferociously brave and superheroic Battle Cat, who serves primarily as He-Man’s fighting mount.

Battle Cat is the alter ego of Cringer, the cowardly, lazy, over-eating feline companion of Prince Adam. He tends to spend most of his time as Cringer, sleeping, eating, and avoiding responsibility, as well as hiding at the slightest sign of trouble or danger. He can talk, although no reason is ever given for this ability. He has the appearance of a green, orange-striped tiger. In the episode "Teela's Quest", Queen Marlena says to Adam in regards to the planet Earth, "There are no talking green tigers on Earth." It is not known if her referring to Cringer as a tiger means he is called a tiger on Eternia, or if she is simply using it as a comparison, but in the episode "A Beastly Sideshow", Evil-Lyn also refers to Cringer as a tiger, and in the episode "House of Shokoti", a boy is surprised that he is "a talking tiger". It is unclear how many others are like him. When Prince Adam transforms into He-Man, he holds out is sword, which fires an energy beam at Cringer, transforming him into Battle Cat. When Cringer becomes Battle Cat, he grows to about twice his size and is outfitted in red armor that covers his head and back, with a saddle mounted on it for riding. As Battle Cat, he is fearless and powerful. His voice changes significantly and he talks with a growl, as opposed to his whimpering voice that is heard when he is Cringer. Cringer cannot stand becoming Battle Cat, but he goes along with it out of loyalty to Adam. He largely serves as a mount for He-Man, but is known for fighting with villains as well. Battle Cat also has a love interest in the episode "The Cat And The Spider": Kittrina, a warrior of the cat-people. 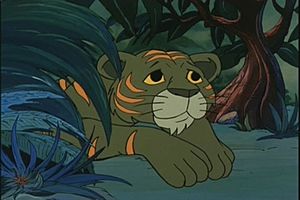 Cringer as an abandoned kitten in the episode "Battle Cat", which narrated his back story and how he was eventually adopted by Prince Adam.

The story of Cringer/Battle Cat's past is covered in the episode "Battle Cat". The episode recounts that Adam, while on a few days exploring the jungle as a boy, heard a kitten whining in a bush and a sabrecat approaching. Concerned that the sabrecat might attack the smaller cat, Adam was able to scare the sabrecat away by using a manticore call and headed to the bush where he discovered a small green tiger cub who had been abandoned. Adam took the kitten back to the palace where it was tended to by Man-At-Arms. After it became well, Adam adopted the kitten as his pet. However the kitten was scared easily, and he and Adam were often teased by Teela and the other children in Eternia, who took to calling him a "cringer" because of his fear causing him to cringe at everything he saw. Although Adam defended his pet, he agreed with calling him Cringer because it was appropriate for the little cat as he was afraid of his own shadow. The Sorceress appeared and told Adam that Cringer might bring him embarrassment now, but in the future he would be useful.

Years passed, and after Adam was given the ability to become He-Man, he usually performed the transformation out of sight of Cringer who, even though he had grown to normal tiger size, was still afraid of just about everything. This all changed at an archaeological dig that Adam and Teela went on with Man-At-Arms, with Cringer in tow because he did not want to leave Adam's side. They inadvertently broke open a door releasing a monster, and to attempt to stop the monster Adam transformed into He-Man. Unbeknownst to him, Cringer was watching the entire transformation and ran away to hide. A now-transformed He-Man tried to reassure Cringer that he was still the same person, just with superpowers. However, as he was doing so he accidentally pointed the sword at Cringer, who cowered in fear as Adam's sword was still energized. A beam shot from the sword and struck Cringer, who suddenly grew to twice his size and gained red body armor and a vicious growling voice. He-Man was surprised to see the change in the usually timid cat, but remembered the Sorceress' words from when he was a child; he then received another message, telling him Battle Cat was now his partner. Using Battle Cat, he was able to confine the beast and save the endangered team. This version of Battle Cat can be seen with He-Man in a MetLife commercial that aired in 2012.

Masters of the Universe vs. The Snakemen (2002)

Cringer (left) and Battle Cat (right) in the 2002 remake of the series.

Cringer is somewhat of a pet to Adam. Although it seems clear that he can understand what is said to him, he cannot speak and sounds like a typical house cat. He is cowardly, although this does not come up as much as in the original series, but more than once he has shown some bravery in order to help Adam. As Battle Cat, he is most often seen merely transporting He-Man and roaring loudly. However, while in the first season he only has a few moments where he fights, in season 2 the writers gave him a more active role; he often fights against the Snake Men and Skeletor's forces. Since he never speaks, there seems to be an effort to portray his relationship with Adam/He-Man as more than master/pet, most often through either Battle Cat or Cringer being badly injured and He-Man entering a rage, or by He-Man explaining things to him.

He is twice seen without his battle helmet, revealing a rather fiercer, sabertoothed version of Cringer's face beneath. In the episode "The Power of Grayskull", King Greyskull was shown to have his own mount, albeit more lion-like and with a mane, who stayed by his side until his death.

In The Toys That Made Us, then-marketing VP of Mattel Paul Cleveland recounts the story that while the decision was made for He-Man to have some sort of vehicle, they no longer had the budget to be able to produce one; the decision was then made to repurpose a tiger from the Big Jim toy line. The tiger was, however, not the same scale as the He-Man figure, and compared to He-Man, was about the size of a horse. Cleveland, however, insisted it to be used, even after artist Tony Guerrero made a green version in an attempt to discourage Cleveland, who instead suggested simply putting a saddle on it, which resulted in Battle Cat's final design. You can see a clip from that episode here.

Cringer is strong enough to carry Adam on his back if Adam is unable to walk on his own or unconscious, and will not hesitate to defend Adam with his life if Adam is in danger. When he transforms into Battle Cat, these qualities are amplified.

A life-size model of Battle Cat was part of the 2012 Go Safari exhibition, in Northampton, and titled Taxi for Adam (a reference to He-Man's alter ego, Prince Adam). The figure was sculptured by Rory Davis and painted by Ross White. The sculpture was the sixth in the series of "Go Safari" animals and was initially placed in Wood Hill (near County Hall). The sculpture was removed at the end of the public art project on 2 September 2012.

All content from Kiddle encyclopedia articles (including the article images and facts) can be freely used under Attribution-ShareAlike license, unless stated otherwise. Cite this article:
Battle Cat Facts for Kids. Kiddle Encyclopedia.