Battle of Roundway Down facts for kids

The Battle of Roundway Down was fought on 13 July 1643 near Devizes, in Wiltshire during the First English Civil War. Despite being outnumbered and exhausted after riding over night from Oxford, a Royalist cavalry force under Lord Wilmot won a crushing victory over the Parliamentarian Army of the West under Sir William Waller.

Viewed as their most decisive victory of the war, the Royalists secured control of South West England which they held until late 1645. Two weeks later they captured the port of Bristol, allowing them to establish links with supporters in Ireland.

On 5 July, Royalist and Parliamentarian armies respectively led by Sir Ralph Hopton and Sir William Waller fought at Lansdowne. Hopton exploited tactical errors by Waller to gain an important victory, although his cavalry suffered heavy casualties in both men and horses. Royalist commander Sir Bevil Grenville was killed during the battle and many of their supplies lost shortly afterwards when an ammunition cart exploded, leaving Hopton badly injured and temporarily blind. Grenville was extremely popular with the Cornish who formed most of Hopton's infantry and the combination badly affected morale, while the loss of cavalry and supplies meant they were badly exposed.

Hoping to obtain reinforcements and supplies from their wartime capital of Oxford, the Royalists withdrew from Lansdown to Marshfield, arriving in Chippenham on 7 July. Despite his retreat, Waller's army was largely intact after the battle and losses were quickly replaced by the Parliamentarian garrison in Bristol. Hopton's precarious position provided an opportunity to crush him if he moved fast enough and Waller set out from Bath with 5,000 troops, reaching Chippenham on 9 July.

As the Parliamentarians approached, Hopton marched south to Devizes, followed by Waller who occupied Roundway Down, high ground approximately 2 kilometres north of the town. Short of materials and outnumbered, the Royalists agreed Prince Maurice and 300 cavalry would break out and race to Oxford for reinforcements, leaving Hopton and the 3,000 Cornish foot to hold Devizes. Departing at midnight on 10 July, Maurice reached Oxford next morning; most of the Royalist field army was absent but Lord Wilmot assembled 1,500 cavalry, then set out for Devizes with Maurice and his men.

The siege of Devizes

On 11 July, Waller brought his army down from Roundway Down and deployed them on the east side of Devizes. To support an attack, he set up an artillery battery within range of the town on Coatefield Hill. Stalling for time, Hopton asked for and received a truce to allow time for negotiations. Overnight as the Parliamentarians waited for Hopton’s response, their cavalry intercepted and captured a Royalist convoy of gunpowder and ammunition that had previously been dispatched to resupply Hopton after the Battle at Lansdowne. Many of their escort escaped but 200 were captured along with the wagons.

On the morning of 12 July, Waller ended talks and began an assault, first bombarding the town with artillery before his infantry attacked the outworks and fortifications. Despite hours of fierce hand-to-hand combat, at the end of the day the Royalists remained in control of Devizes. Early next morning, Wilmot's relief force neared Roundway Down, and as they did so fired several cannon to warn Hopton of their approach. Waller now abandoned the siege and marched his force north to intercept them; reaching the high ground, the infantry and artillery were placed in the centre, with Waller commanded the cavalry on the left and Sir Arthur Haselrig the right.

The battle of Roundway Down 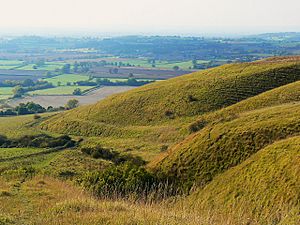 The Royalist cavalry was divided into three brigades; as well as being in overall command, Wilmot led that on the left, with Sir John Byron on the right, and the Earl of Crawford in reserve. Despite having ridden all night, Wilmot attacked immediately and caught Waller out of position, with Haselrig and his regiment of "London lobsters in an exposed forward position. Haselrig tried to rally his men but withdrew when he saw Bryon preparing to attack and rejoined the rest of Waller's cavalry.

As Waller advanced down the hill, Byron continued his attack supported by Wilmot and the Royalist reserve under Crawford; with their infantry unable to fire for fear of hitting their own men, the Parliamentarian cavalry were swept from the field. Pursued by the Royalists, some of them rode over the edge of a steep precipice and into an area that became known as “the Bloody Ditch.”

Now isolated and with 3,000 Royalists from Devizes advancing against their rear, Waller ordered his infantry into defensive squares and began withdrawing towards the northwest. After approximately an hour, Bryon’s cavalry returned from their pursuit and captured the Parliamentarian artillery which they turned on the retreating enemy, quickly causing them to break apart. Fleeing in all directions, many were cut down by Wilmot's men; Waller and the remnants of his cavalry escaped toward Bristol, leaving the remainder to surrender.

The Parliamentarian army in the west was virtually wiped out, with losses estimated to be as many as 600 killed and 1,200 captured, along with their artillery, wagons, gunpowder, ammunition, and supplies. In his letter reporting the victory, Byron lists Royalist losses as "very few killed, but many hurt", although this applies only to officers and other "gentlemen". Arguably the most comprehensive Royalist victory of the war, it secured the south-west and less than two weeks later they captured the vital port of Bristol, allowing them to establish links with their supporters in Ireland.

The battle was an outstanding victory for the Royalists; despite travelling over 60 kilometres directly onto the battlefield, 1,800 cavalry defeated a superior force of 5,000 including cavalry, infantry, and artillery. They were helped by the high quality of Wilmot's force, which contained some of the most experienced units in the Royalist army, and the "deplorable tactics" employed by Haselrig, who awaited Wilmot's charge at the halt, hoping their carbine fire would drive them off. This was a mistake commonly made by Parliamentarian cavalry leaders in the early stages of the war. Conversely, Waller’s reputation as a military leader suffered because of the loss, even though historians claim that his leadership at both Lansdowne and Roundway Down was without fault.

The village of Roundway is today a small hamlet 2 kilometres north of Devizes with a population of approximately 25 residents. Discussions regarding permanent burial sites for those who lost their lives in the battle are under consideration today.

All content from Kiddle encyclopedia articles (including the article images and facts) can be freely used under Attribution-ShareAlike license, unless stated otherwise. Cite this article:
Battle of Roundway Down Facts for Kids. Kiddle Encyclopedia.