Battleford Court House is the facility located in Battleford to provide a public forum used by the Saskatchewan legal system to adjudicate disputes and dispense civil, labour, administrative and criminal justice under its laws.

In 1785, a fur trading post was built at Battleford. The Dominion government acquired the North-West the Hudson's Bay Company in 1870, and in 1873, created the North-West Mounted Police to maintain law and order. In 1876 Fort Battleford was established, a North-West Mounted Police post. Shortly thereafter, in 1877 the capital of the North West Territories moved from Fort Pitt to Battleford. In 1883 the capital of the North West Territories moved again, this time to Regina. In 1886 the Supreme Court of the North-West Territories with five puisne judges was established and resided in Regina. The original Provincial Regina Supreme Court House was constructed in 1895 and replaced in 1965. Saskatchewan became a province in 1905. The Judicature Act, 1907, established the Supreme Court of Saskatchewan. The Battleford Court House was designed by the architectural firm of Storey and Van Egmond, and constructed in 1907, marking the end of the old territorial court system.

The building was designated a National Historic Site of Canada in 1981. 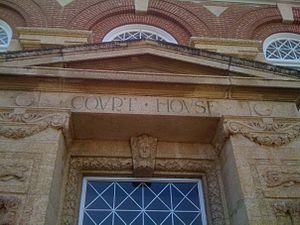 All content from Kiddle encyclopedia articles (including the article images and facts) can be freely used under Attribution-ShareAlike license, unless stated otherwise. Cite this article:
Battleford Court House Facts for Kids. Kiddle Encyclopedia.