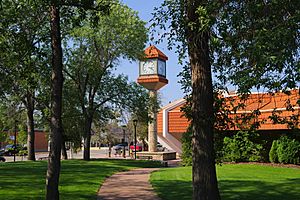 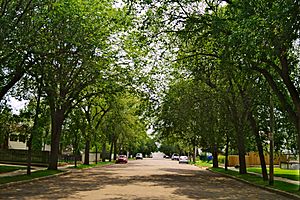 For thousands of years prior to European settlement, succeeding cultures of indigenous peoples lived in the area. The Battlefords area (including the present city of North Battleford and town of Battleford) was home to several historic aboriginal groups, including the Algonquian-speaking Cree and Blackfeet as well as Siouan Assiniboine First Nation band governments, who contested for control of local resources.

Early European settlement began as a result of fur trading by French colonists in the late 18th century. The Canadians founded Fort Montaigne d'Aigle (Eagle Hills Fort) nine miles below the confluence of the Saskatchewan and Battle Rivers in 1778. A year later the fort was abandoned following conflict between traders and natives.

Permanent European settlement in the area centred around the town of Battleford, founded 1875 and located on the south side of the North Saskatchewan River. Battleford served as capital of the North-West Territories between 1876 and 1883.

In 1905 the construction of the Canadian Northern Railway main line to Edmonton placed the line on the north side of the North Saskatchewan River. North Battleford, built along the railway line, was incorporated as village in 1906, a town in 1907 and a city (with population 5000) in 1913.

The Assyrians were one of the first settlers of the area in and around North Battleford. The immigrant colony comprised 36 men and a few women from the town of Urmia in northwestern Persia. It was established in 1903 by Dr. Isaac Adams, an Assyrian Presbyterian missionary. In 1907, 40 more settlers arrived. Eventually, due to economic hardships, Dr. Isaac Adams and a few close relatives emigrated to Turlock, California. The descendents of the families who remained in North Battleford have names that are Assyrian in origin. Examples of Assyrian family names include Bakus, Essau, and Odishaw.

Population growth stagnated until the 1940s and then grew to approximately 10,000 by the 1960s. The city has grown into an administrative centre and service hub for the economic, education, health and social needs of the region.

The Latter Rain Revival, a Christian movement, started here in 1946–48.

A number of heritage buildings are located within the city. The North Battleford Public Library was built in 1916 with a $15,000 grant from the Carnegie Foundation of New York. and the Canadian National Railways Station was built in 1956.

In the late 2000s many Ruthenians have emigrated to Canada, concentrating in North Battleford. Most of them came from the same town of Ruski Krstur.

In January 2012 many reports were made, in and around North Battleford, of strange aerial noises.

North Battleford is the home of one of four branches of the Saskatchewan Western Development Museum. This branch focuses on the agricultural history of Saskatchewan, including a pioneer village. A prominent feature is the former Saskatchewan Wheat Pool grain elevator No. 889 from Keatley, Saskatchewan. The grain elevator was moved to the museum grounds in 1983.

The city also has the Allen Sapp Gallery, featuring a noted Cree painter. 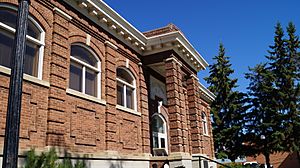 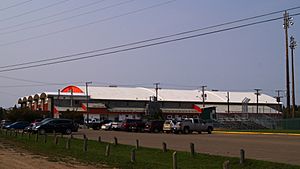 The North Battleford CUplex (Credit Union CUplex), which opened in 2013, includes the Dekker Centre for the Performing Arts, the Northland Power Curling Centre, the NationsWest Field House, and the Battlefords CO-OP Aquatic Centre.

All content from Kiddle encyclopedia articles (including the article images and facts) can be freely used under Attribution-ShareAlike license, unless stated otherwise. Cite this article:
North Battleford Facts for Kids. Kiddle Encyclopedia.