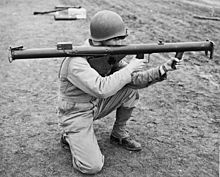 Soldier with a bazooka

A Bazooka is a very powerful weapon that shoots a rocket. It is a small and easily carried and sits on the shoulder to fire. It can also fire armour piercing missiles. The word Bazooka comes from a musical instrument made of pipes invented by an American radio comedian, Bob Burns (1896—1956).

The bazooka was invented by rocket scientist, Robert H. Goddard, at the end of World War I. In World War II the weapon was quickly developed for use by the army. In June 1942 it went from being a basic drawing design to use on the battlefield in only 30 days. Improved versions in later years are called rocket-propelled grenades.

All content from Kiddle encyclopedia articles (including the article images and facts) can be freely used under Attribution-ShareAlike license, unless stated otherwise. Cite this article:
Bazooka Facts for Kids. Kiddle Encyclopedia.