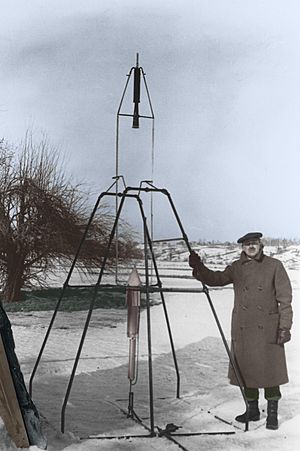 Goddard with his first rocket

Robert Goddard (1882-1945) was an American scientist who designed, built and fired the first liquid fuelled rocket. On March 16, 1926, his first rocket reached a height of 56 m (184 ft) at a speed of 100 km/h (62 mph). When he suggested that a rocket could travel fast enough to leave the Earth and reach the Moon, the newspapers made fun of him. Many of his ideas, such as multi stage rockets, and the concept of escape velocity are now part of modern rocket science. He has been called "the father of space flight."

All content from Kiddle encyclopedia articles (including the article images and facts) can be freely used under Attribution-ShareAlike license, unless stated otherwise. Cite this article:
Robert H. Goddard Facts for Kids. Kiddle Encyclopedia.