The Goddard Rocket Launching Site is a National Historic Landmark commemorating the launch site of the world's first successful liquid-fueled rocket. It is located at 20 Upland Street, Auburn, Massachusetts, within the Pakachoag Golf Course. The launch site is indicated with two markers accessible to visitors while the golf course is open. An obelisk marking the launch site itself is about 1000 feet (300 m) southeast of Upland Street at the "9th Fairway, between Tee and Green," of the Pakachoag Golf Course. This marker may be difficult to access due to the nature of golf. The best advice for visiting is to walk the rock wall between 1st and 9th fairways. A second marker, rectangular in shape, is just off Upland Street in the northwest corner of the golf course. 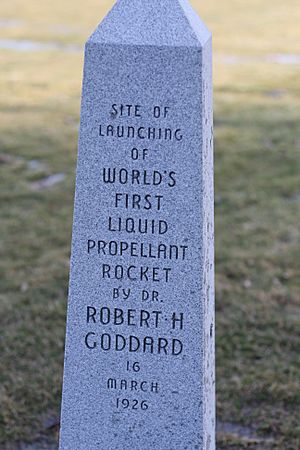 Goddard's final launch from Auburn, on July 17, 1929, was also a historic first. The 11-foot (3.4 m) rocket carried an aneroid barometer, thermometer, and a camera triggered when the parachute opened. All three instruments operated successfully and were recovered. The rocket achieved a maximum altitude of 90 feet (27 m) in an 18.5-second flight covering a distance of 171 feet (52 m).

The site was declared a National Historic Landmark in 1966.

All content from Kiddle encyclopedia articles (including the article images and facts) can be freely used under Attribution-ShareAlike license, unless stated otherwise. Cite this article:
Goddard Rocket Launching Site Facts for Kids. Kiddle Encyclopedia.