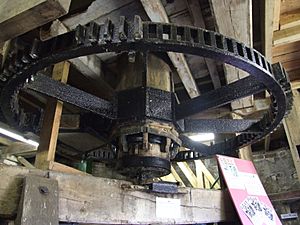 The great spur wheel on the ground floor of the Rottingdean windmill. The millstones on the floor above are driven from here. 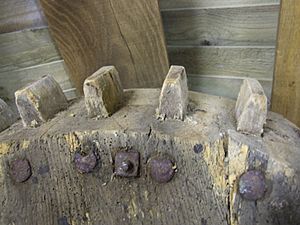 This large wooden gearwheel is mounted atop the Upright shaft and receives drive from the brake wheel which is driven by the windshaft and sails. Sadly, it was cut in half during the fitting of a steel skeleton to assist in supporting the mill.

Beacon Mill or New Mill is a grade II listed smock mill at Rottingdean, Sussex, England which has been restored as a seamark.

Beacon Mill, was built in 1802. There are records of an earlier mill on the site, thought to have been a post mill. During the digging of the foundations, a human skeleton was found of an ‘ancient warrior with a sword’ but the remains were stolen while the labourers had lunch and have never been recovered. The mill was working until 1881 and by 1890 was in such bad condition that demolition was considered. In 1905, the Marquis of Abergavenny had the mill repaired, but she was derelict again by the early 1920s. It was 1935 before she was restored again, the millwrighting being done by Neve's of Heathfield and new sails were made by Holman's, the Canterbury millwrights. In 1969, the mill was leaning to the north east, and Hole's, the Burgess Hill millwrights erected a steel frame inside the smock to support the mill, and fitted new sails. The steel framing was extended into the cap in 1974

Beacon Mill is a three-storey smock mill on a single-storey brick base. It has a Kentish-style cap, and four Patent sails. It originally had a fantail, but this is now missing.

The Rottingdean windmill was the inspiration for the trademark (logo) for the publishing house of Heinemann. It was designed by Sir William Nicholson, a Rottingdean resident, and on older Heinemann hardbacks you will see it engraved on the back board of the book. Although Rottingdean Mill was Nicholson's inspiration, he actually traced an older Dutch post-mill as his final design. Updated versions of the windmill are still used for Heinemann publications.

The mill also featured in the music video for That Old Pair of Jeans by Fatboy Slim.

Beacon Mill is open to the public from 14:00 to 16:30 on both days of National Mills Weekend, and on the third Sunday of each month from May to September.

All content from Kiddle encyclopedia articles (including the article images and facts) can be freely used under Attribution-ShareAlike license, unless stated otherwise. Cite this article:
Beacon Mill, Rottingdean Facts for Kids. Kiddle Encyclopedia.