"Bearskin" (German: Der Bärenhäuter) is a fairy tale collected by the Brothers Grimm (KHM 101). A variant from Sicily, "Don Giovanni de la Fortuna", was collected by Laura Gonzenbach in Sicilianische Märchen and included by Andrew Lang in The Pink Fairy Book. Italo Calvino included another Italian version, "The Devil's Breeches" from Bologna, in his Italian Folktales.

The tale is classified as Aarne–Thompson type 361 (Bearskin), in which a man gains a fortune and a beautiful bride by entering into a pact with the devil.

The modern version of tale was originally published by the Brothers Grimm in the first edition of Kinder- und Hausmärchen vol. 2 (1815) no. 15, under the title "Der Teufel Grünrock" (English: 'Devil Greenjacket'), and substantially revised in the 5th edition of the book. Their story is based on the version collected by the von Haxthausen family, and on the tale "Vom Ursprung des Namens Bärnhäuter", first published in 1670 by Hans Jakob Christoffel von Grimmelshausen.

A man was a soldier, but when war ended, his parents were dead, and his brothers had no place for him.

A green-coated man with a cloven hoof appeared to him and offered to make him rich if he would for seven years not cut his hair, clip his nails, bathe, or pray, and wear a coat and cloak that he would give him. At the end, if he survived, he would be rich and free. If he died during the time, the devil would have him. The desperate soldier agreed and the devil gave him the green coat telling him he would find its pockets always full of limitless money and then a bearskin, telling him that he must sleep in it and would be known as Bearskin because of it.

Bearskin set out, and gave much money to the poor that they would pray for him, to live out the seven years. After several years, he grew so revolting that he had to pay heavily to get any shelter. In the fourth year, he heard an old man lamenting and persuaded him to tell his tale: he had lost all his money, did not know how to provide for his daughters and could not pay the innkeeper, so he would be sent to jail. Bearskin paid the innkeeper and gave the old man a purse of gold as well. 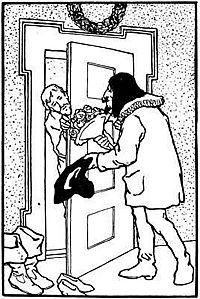 The old man said that he would marry him to one of his daughters in gratitude. The oldest ran away, screaming, from the sight. The middle one said he was worse than a bear that had tried to pass itself off as human. The youngest one agreed to fulfill her father's promise. Bearskin gave her half a ring and promised to return in three years. Her sisters ridiculed her at length.

At the end of the seven years, Bearskin found the devil again and demanded he fulfill his promise. The devil then proceeds to bathe Bearskin, clip his nails and cut his hair until he is as good as new. Bearskin then demands that the devil say the Lord's prayer. The devil warns Bearskin not to push his luck as he has already won their bargain and disappears. Clean and with his money, he dressed himself as a fine gentleman and went to the old man's house, where the older sisters served him, and his bride (dressed in black) showed no reaction to him. He told the old man that he would marry one of his daughters. The two older sisters ran off to dress splendidly, and Bearskin dropped his half of the ring into a wine cup and gave it to his bride. She drank it and realized that he was her bridegroom.

All content from Kiddle encyclopedia articles (including the article images and facts) can be freely used under Attribution-ShareAlike license, unless stated otherwise. Cite this article:
Bearskin (German fairy tale) Facts for Kids. Kiddle Encyclopedia.