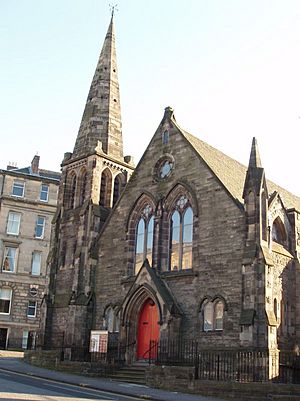 Bellevue Chapel is a church in Rodney Street in Canonmills, Edinburgh, Scotland.

This building, built 1878–1881, was originally a Lutheran place of worship for German residents of Edinburgh and those that were building the Forth Bridge.

After the First World War in 1919 one of the Christian Brethren meetings in Edinburgh, meeting at Picardy Place, itself founded in 1891, moved into this building and it was renamed Bellevue Chapel. (Another Brethren meeting gathered at Lochrin Place, later moving to Lauriston Place and then, in 1967, to what is now Bruntsfield Evangelical Church.)

The scholar, F. F. Bruce, joined this meeting when he arrived in Edinburgh to teach at the University in 1935 (leaving in 1938 to teach in England).

All content from Kiddle encyclopedia articles (including the article images and facts) can be freely used under Attribution-ShareAlike license, unless stated otherwise. Cite this article:
Bellevue Chapel Facts for Kids. Kiddle Encyclopedia.