Belling the Cat facts for kids 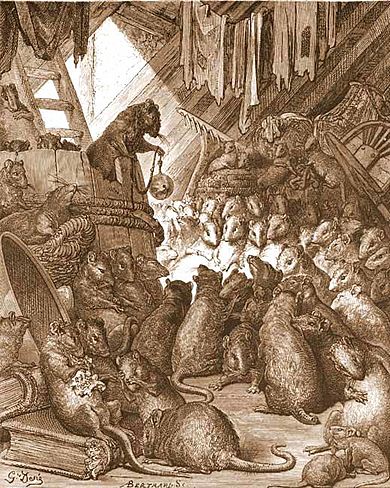 The mice meet together to discuss putting a bell on the cat -- engraving by Gustave Doré, c. 1868

Belling the Cat, also known as The Bell and the Cat or The Mice in Council is a story which has become a traditional part of European and Western culture.

The story may have come from Aesop. The earliest recorded versions are from the Middle Ages.

The story is about a group of mice who talk about what to do about a cat which threatens them. One wants to place a bell around the cat's neck. All agree. Then one mouse asks who will volunteer to put the bell on the cat? Not one stepped forward.

The story is about the difference between a good idea and what may be needed to convert an idea into action.

The story gives us the idiom to bell the cat, which means to try an impossible or near-impossible task. In other words, it is easier said than done.

All content from Kiddle encyclopedia articles (including the article images and facts) can be freely used under Attribution-ShareAlike license, unless stated otherwise. Cite this article:
Belling the Cat Facts for Kids. Kiddle Encyclopedia.