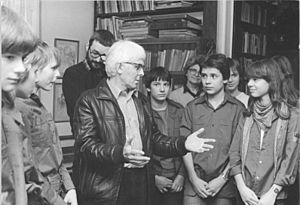 Pludra wrote narratives and novels for children and teenagers. His books in total sold more than five million times, which made him one of the most successful authors of East Germany. Some of his books have been made into movies.

All content from Kiddle encyclopedia articles (including the article images and facts) can be freely used under Attribution-ShareAlike license, unless stated otherwise. Cite this article:
Benno Pludra Facts for Kids. Kiddle Encyclopedia.