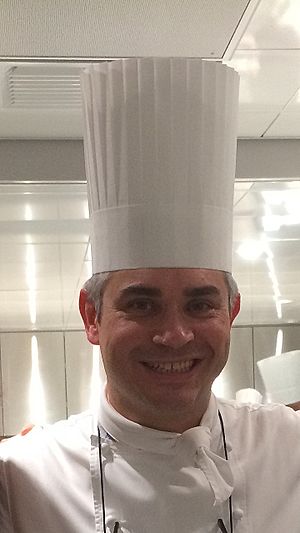 Benoît Violier (22 August 1971 – 31 January 2016) was a French-Swiss chef. He owned the three Michelin star Restaurant de l'hôtel de Ville from 2012 until his death. The restaurant was first on La Liste in December 2015.

Violier was born in Saintes, Charente-Maritime. He studied in Paris. He moved to Switzerland in 1996 to work for Philippe Rochat. He became a Swiss citizen in 2014.

All content from Kiddle encyclopedia articles (including the article images and facts) can be freely used under Attribution-ShareAlike license, unless stated otherwise. Cite this article:
Benoît Violier Facts for Kids. Kiddle Encyclopedia.