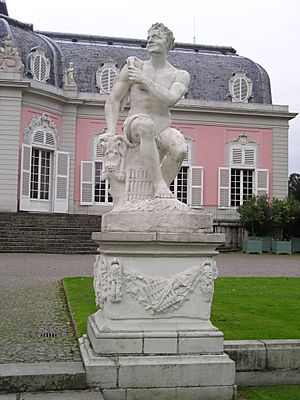 Benrath is a part of Düsseldorf. It belongs to Düsseldorf since 1929.

The name Benrath came from the "Knights of Benrode". Benrath was mentioned for the first time in 1222. The first church of Benrath was built in 1002. In the 14th century Benrode belonged to the Counts of Berg. Benrath was a village.

In the time of Industrial Revolution Benrath lied next to an important railway connection. Benrath grew very fast in that time.

In 1929 Benrath became a part of Düsseldorf.

Benrath is in the South of Düsseldorf. It has an area of 5.90 km² and 15,900 inhabitants. There is a railway station in Benrath (Benrath Railway Station). Until the 1980s, some long distance trains stopped in Benrath. It is still a regional station.

In the German language the Benrath line is the border line between the Northern German and the Southern German idiom.

The Benrath Castle is one of the largest castles from baroque time in Germany. In the castle there is a museum. The park of the castle is very famous, too.

All content from Kiddle encyclopedia articles (including the article images and facts) can be freely used under Attribution-ShareAlike license, unless stated otherwise. Cite this article:
Benrath Facts for Kids. Kiddle Encyclopedia.