Beornwulf of Mercia facts for kids 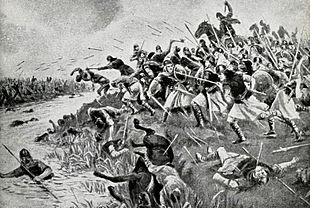 Beornwulf ( 826) was a Mercian nobleman who became the King of Mercia. Although not of the Mercian royal family himself he usurped the throne from Ceolwulf in 823. He ruled Mercia until his death three years later.

Little is known about Beornwulf's family. He played a large part in Ceolwulf I losing the throne in 823. He succeeded Ceolwulf as king in the summer of 823. Beornwulf continued the campaign against Powys started by Coenwulf and his brother Ceolwulf I. By the end of 823 Powys was being controlled by Mercia. By 825 Beornwulf had extended his authority over Kent, Essex and Middlesex. In 825 Beornwulf invaded Wessex. In what Frank Stenton called "one of the most decisive battles of Anglo-Saxon history" Egbert defeated Beornwulf at the Battle of Ellandun. This was the end of the Mercian kings dominating England. Egbert sent his son Athelwulf with an army to overthrow Baldred, the Mercian sub-king. As a result, all of Kent, Surrey, Sussex and East Anglia submitted to Egbert of Wessex. Egbert was cautious though. He kew Mercia had a powerful army and did not attack Mercia directly. Instead he the East Anglians to revolt against Beornwulf. When Beornwulf tried to recover East Anglia in 826 he was killed in the attempt. He was succeeded by one of his ealdormen, Ludeca of Mercia.

All content from Kiddle encyclopedia articles (including the article images and facts) can be freely used under Attribution-ShareAlike license, unless stated otherwise. Cite this article:
Beornwulf of Mercia Facts for Kids. Kiddle Encyclopedia.