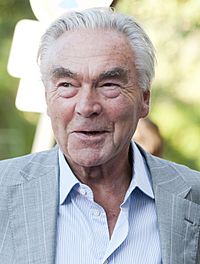 Josef "Beppo" Mauhart (14 September 1933 – 7 May 2017) was an Austrian football executive and journalist. He was born in Enns, Austria. He was appointed to the supervisory board of Austria Tabak in 1972 and became deputy chairman there in 1976. In 1977, Austria Tabak became a sponsor of the FK Austria Wien football club. The club changed its name to Austria Memphis – a cigarette brand.

From 1984 to 2002, Mauhart was president of the Austrian Football Association. He had the longest tenure in the history of the association.

Mauhart died on 7 May 2017 in Munich, Germany from complications of a stroke at the age of 83.

All content from Kiddle encyclopedia articles (including the article images and facts) can be freely used under Attribution-ShareAlike license, unless stated otherwise. Cite this article:
Beppo Mauhart Facts for Kids. Kiddle Encyclopedia.