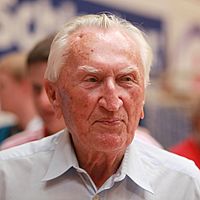 Bernhard Kempa (19 November 1920 – 20 July 2017) was a German handball player and coach. He became world champion in field handball in 1952 and 1955 as a national team player. He was born in Opole, Upper Silesia. Kempa made a significant contribution as the outstanding player.

In 2011, Kempa was admitted to Germany's Sports Hall of Fame.

Kempa died in Bad Boll, Germany of complications from Parkinson's disease on 20 July 2017 at the age of 96.

All content from Kiddle encyclopedia articles (including the article images and facts) can be freely used under Attribution-ShareAlike license, unless stated otherwise. Cite this article:
Bernhard Kempa Facts for Kids. Kiddle Encyclopedia.