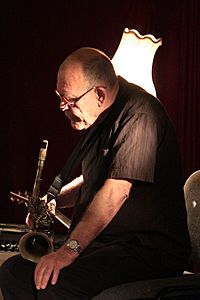 Bernard Francis "Bernie" McGann (22 June 1937 – 17 September 2013) was an Australian jazz alto saxophone player. He began his career in the late 1950s. He stayed active as a performer, composer and recording artist until his death. He was born in Granville, New South Wales.

McGann died from complications following heart surgery on the night of 17 September 2014 in Sydney. He was 76 years old.

All content from Kiddle encyclopedia articles (including the article images and facts) can be freely used under Attribution-ShareAlike license, unless stated otherwise. Cite this article:
Bernie McGann Facts for Kids. Kiddle Encyclopedia.