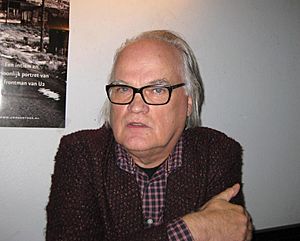 Bert van de Kamp (8 March 1947 – 9 April 2020) was a Dutch music journalist. He was known for his interviews with pop stars in the Dutch Muziekkrant OOR. He was born in Rotterdam. In 1972 van de Kamp won the prize: Wordt Popjournalist en Vlieg naar Londen!.

From 1973 to 1977 he was writer of Muziekkrant OOR. He wrote about many music styles; of hardrock to singer-songwriters. From 1977 to 1980 he was correspondent in London for Muziekkrant OOR and the KRO radio and television magazine Studio. In 1995 he won the first Pop Pers Prijs [nl].

All content from Kiddle encyclopedia articles (including the article images and facts) can be freely used under Attribution-ShareAlike license, unless stated otherwise. Cite this article:
Bert van de Kamp Facts for Kids. Kiddle Encyclopedia.