Elisabet "Betti" Alver (23 November [O.S. 10 November] 1906 in Jõgeva – 19 June 1989 in Tartu), was one of Estonia's most notable poets. She was among the first generation to be educated in schools of an independent Estonia. She went to grammar school in Tartu. 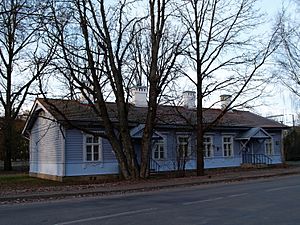 The Betti Alver Museum in Jõgeva

She began as a prose writer. She became known for being a member of the Arbujad ("Soothsayers"), a small group of influential Estonian poets including Bernard Kangro, Uku Masing, Kersti Merilaas, Mart Raud, August Sang, Heiti Talvik and Paul Viiding. After the war her husband Heiti Talvik was imprisoned by the Soviets and died in Siberia. For two or three decades she was silent as a poet as protest of Soviet rule, but renewed activity in the 1960s. Of note in this second period is the 1966 collection Tähetund or "Starry Hour." She also wrote novels and did translation work. On the hundredth anniversary of her birth a museum was dedicated to her in Jõgeva.

All content from Kiddle encyclopedia articles (including the article images and facts) can be freely used under Attribution-ShareAlike license, unless stated otherwise. Cite this article:
Betti Alver Facts for Kids. Kiddle Encyclopedia.