Betula uber, Virginia round-leaf birch, is a rare species of tree in the birch family. One of the most endangered species of North American trees, it is endemic to Smyth County, in the U.S. state of Virginia. It is part of the temperate broadleaf and mixed forests biome. 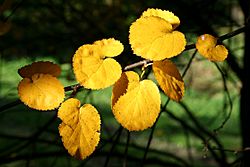 The tree was first described in 1914 as a variety of Betula lenta, and elevated to species status in 1945. It hybridizes with B. lenta and it has been suggested that it is actually a round-leaved mutant form of B. lenta. Some authorities prefer to treat it as a variety.

After it was first discovered in 1914, the tree was not seen again and was thought to be extinct until 1975, when some individuals were found. These 18 adult trees and 23 saplings and seedlings were in a forest along the degraded banks of Cressy Creek on Smyth County, Virginia. The tree was federally listed as an endangered species and conservation efforts were begun. Many seedlings were sprouted in greenhouses and planted in the forest. By 1995 there were 20 populations and it was downlisted to threatened status. The tree was propagated in order to discourage collectors from taking wild specimens, or vandals from destroying them. A recent count estimated 961 individuals in the wild as of 2006. Eight of these are in the original creekside population. The species will not be removed from the endangered species list yet because it has not been observed reproducing sexually, and naturally, more than once. The expansion of its range is limited because the area is surrounded by agricultural land, but the territory on which the tree occurs is not immediately threatened.

It is a moderately sized tree, growing up to 15 meters tall. The crown is compact. The bark is aromatic and dark brown or black in color. The leaf is round or slightly oval with a heart-shaped base and a toothed edge and measures up to 5 centimeters long. The catkin is up to 2.8 centimeters long and contains tiny samaras measuring 2 millimeters in length. The tree is wind-pollinated and reproduces by seed. Seed production is much heavier in some years than in others. The tree's lifespan is around 50 years.

All content from Kiddle encyclopedia articles (including the article images and facts) can be freely used under Attribution-ShareAlike license, unless stated otherwise. Cite this article:
Betula uber Facts for Kids. Kiddle Encyclopedia.