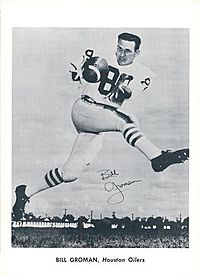 William Frederick Groman (July 17, 1936 – June 17, 2020) was an American professional football player. He was a wide receiver in the American Football League (AFL). He played college football at Heidelberg College.

He played professionally for the Houston Oilers from 1960 through 1962 and was on the first two AFL championship teams. He played for the Denver Broncos in 1963, and for the Buffalo Bills in 1964 and 1965.

Groman was born in Tiffin, Ohio. He studied at Heidelberg University. Groman died on June 17, 2020 in Houston, Texas at the age of 83.

All content from Kiddle encyclopedia articles (including the article images and facts) can be freely used under Attribution-ShareAlike license, unless stated otherwise. Cite this article:
Bill Groman Facts for Kids. Kiddle Encyclopedia.