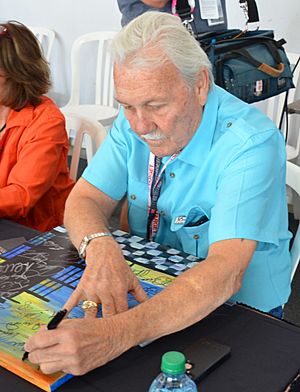 Bill Simpson (March 14, 1940 – December 16, 2019) was an American racecar driver and businessman. He was best known as a key figure in the racing safety business with his company Simpson Performance Products. He left Simpson Performance in a controversy surrounding Dale Earnhardt's death.

He was added into the Motorsports Hall of Fame of America in 2003. He was the author of the book Racing Safely, Living Dangerously, and its sequel, Through the Fire.

Simpson died of stroke-related problems in Indianapolis, Indiana on December 16, 2019 at the age of 79.

All content from Kiddle encyclopedia articles (including the article images and facts) can be freely used under Attribution-ShareAlike license, unless stated otherwise. Cite this article:
Bill Simpson Facts for Kids. Kiddle Encyclopedia.