Bill the Goat facts for kids

Kids Encyclopedia Facts
For the Royal Welsh fusiliers regimental goat, see Billy the goat.
For the Canadian goat who served as a military mascot during WW1, see Sergeant Bill.

Bill the Goat is the mascot of the United States Naval Academy. The mascot is a live goat and is also represented by a costumed midshipman. There is also a bronze statue of the goat in the north end zone of Navy–Marine Corps Memorial Stadium. This statue also plays a role in "Army Week" traditions.

The Navy Monkey (which was really a gorilla) was the first mascot. It was the favorite animal of U.S. Secretary of the Navy George Bancroft, who established the United States Naval Academy at Annapolis in 1845 during the administration of President James K. Polk. Bancroft's favorite animal, the monkey stayed the primary mascot—along with a cat—from 1847 to 1851. The first Bill the Goat appeared in 1893. Currently, Bill XXXVI reigns as the 39th mascot and is the 36th goat to be named Bill. His backup is Bill XXXVII.

The legend of Bill the Goat 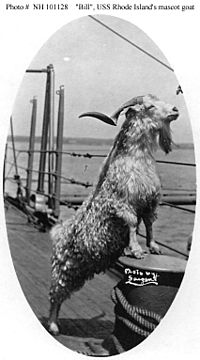 For centuries, ships sailed with livestock in order to provide sailors with fresh food. Ships in the British and early American navies often carried goats, to eat the garbage and other undesirable food and to return milk and butter. The first usage of "billy goat" for a male goat occurs in the 19th century replacing the older term "he-goat." And the first creature, animal or otherwise, to circle the earth twice was a (female) goat that traveled first with Wallis (1767) and then with Captain Cook (1768). After the Cook trip she was allowed to retire.

There is a legend that a Navy ship once sailed with a pet goat, and that the goat died during the cruise. The officers preserved the skin to have it mounted when they returned to port. Two young ensigns were entrusted with the skin. On their way to the taxidermist, they stopped by the United States Naval Academy to watch a football game. At halftime, for reasons the legend does not specify, one ensign decided to dress up in the goat skin. The crowd appreciated the effort, and Navy won the game.

In 1893, a live goat named El Cid made his debut as a mascot at the fourth Army–Navy Game. El Cid was a gift to the Brigade of Midshipmen from officers of the USS New York. With the goat, Navy gained a 6-3 win over Army that year, so he was adopted as part of the team.

There were other mascots in those years, including a gorilla—the very first mascot, two cats, a bulldog, and a carrier pigeon. However, the goat has served without interruption since 1904.

In the early 1900s, the beloved mascot was finally given a name. On the return trip to the Naval Academy after the Midshipmen triumphed over West Point, the goat was led on a victory lap through the train and did not leave the midshipmen until they reached Baltimore.

It was then that the goat was given the name "Bill", which was the name of a pet goat kept by Commander Colby M. Chester, Commandant of Midshipmen, from 1891-1894.

Many goats, one mission 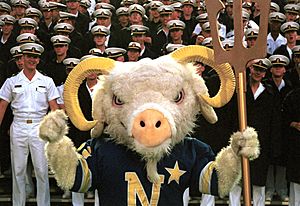 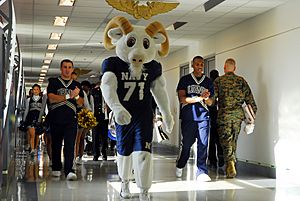 Bill the Goat and U.S. Naval Academy Band members celebrate Army-Navy game at the Pentagon in 2008

The kidnappings of Bill

The first recorded kidnapping of Bill in modern times was accomplished one week before the Army-Navy football game in the fall of 1953. A group of cadets from the United States Military Academy (USMA) at West Point sneaked onto the Annapolis grounds with the help of a West Point exchange student who was living at the Naval Academy. After locating the goat behind the stadium, the cadets stashed it in the backseat of a convertible; however, their cover was blown when they stopped at a gas station and the goat's horns shredded the convertible top. The cadets successfully made it back to the USMA and presented the goat to the entire Corps at a raucous dinnertime pep rally; however, many Navy midshipmen refused to go to classes until Bill was returned. After the goat's return was ordered by officials from West Point (as well as President Dwight D. Eisenhower himself, a USMA graduate), the Army cadets staged a mass protest which was posted on the front page of several New York papers as "Goat Rebellion at West Point." The Army football team went on to defeat Navy 20-7.

The Air Force joined in soon after, via a raid by three United States Air Force Academy (USAFA) cadets a month prior to the first Air Force/Navy football game in 1960. Bill was flown to the AFA in the bomb bay of an Air Force B-26, where he resided on a farm until Naval Intelligence tracked him to Colorado. The superintendent of the USAFA learned of the mission through intimidation of the Cadet Wing, and forced the return of Bill to Annapolis. The event was reported by several national media outlets, including Life, at the time.

During the height of a heated in-state rivalry with Maryland, the goat was stolen by Maryland students. This happened shortly before the controversial 1964 match, where actions on the field caused the suspension of the series for 40 years. 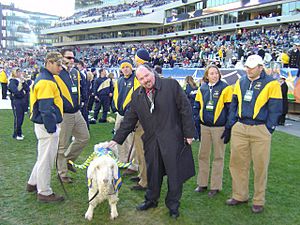 During the pre-game activities of the USNA-USAFA game in 1970 at RFK Stadium, a long motorcade entered the stadium, accompanied by motorcycles and other police vehicles, and turned toward the USAFA side of the stadium. A staff car with USAF General Officer flags flying was the main focus. All the Cadets rose to attention, assuming that a high level USAF official was in the car. The Midshipmen rose in similar fashion out of respect for whomever was in the car. The passenger door opened, and first to come out were two men dressed in USAFA capes and caps, followed quickly by USNA's Bill the Goat, after which the supposed Cadets threw off their outer capes/caps exposing their goat-handler sweaters.

On November 5, 1995, a month before the Army-Navy football game, a group of seniors from the USMA staged a pre-dawn raid on the Naval Academy Dairy Farm in Gambrills, Maryland and kidnapped Bill the Goat XXVI, XXVIII and XXIX. The Pentagon was notified, and the three goats were returned under a policy forged by flag officers of the Army and Navy that stipulates that the "kidnapping of cadets, midshipmen or mascots will not be tolerated".

However, the truce was broken in 2002, when Army cadets kidnapped the Navy mascot from the Dairy Farm during a Veterans Day weekend, wearing Grateful Dead T-shirts as a disguise. After residing in a Pennsylvania farm, the Angora goat was returned.

On November 17, 2007 cadets from the USMA raided the Naval Academy Dairy Farm and kidnapped Bill XXXII, Bill XXXIII and Bill XXXIV prior to an upcoming Army–Navy football game. The operation was named "Operation Good Shepherd" according to a Naval Academy spokesman. The goatnappers created a video showing the planning and actually goatnapping, and then posted it on YouTube.

On November 24, 2012, a passerby spotted an Angora goat tied up near the Pentagon in a median at an intersection on Army Navy Drive in Arlington County, Virginia. Representatives of the Animal Welfare League of Arlington rescued the ruminant and took it to the League's animal shelter. Calls were then placed to law enforcement officials in Anne Arundel County, Maryland, who notified the caprine's presumptive owners that their property had been found and needed a ride back home. The manager of Maryland Sunrise Farm (the successor to the Naval Academy Dairy Farm), where Bill XXXIII and Bill XXXIV usually resided, then claimed and retrieved the beast, which was in good condition, but did not know which Bill was absent from the farm. A Navy spokeswoman said, “At this time, we are unaware of who may have taken the goat, but it could be related to the Army-Navy game Dec. 8.” A spokesman for the USMA stated that he had "no official knowledge" of any theft of a goat. No charges were filed because it was unclear as to who had tied and abandoned the animal in the median. 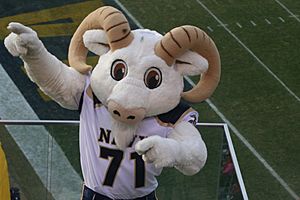 Bill the Goat, the human version, at the 2008 Army–Navy Game.

The costumed mascot is sponsored by the Class of 1971; for this reason he wears the number 71 on his jersey. 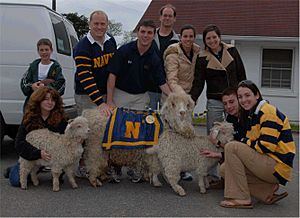 Bill XXXII, XXXIII, and XXXIV with Team Bill on May 2007.

Team Bill is a group of midshipmen from the United States Naval Academy who volunteer to take care of the Bill goats and to transport them to and from events. Currently there are two Bill goats being cared for by the midshipmen at a dairy farm in Gambrills, Maryland. The adjacent picture shows Team Bill on May 5, 2007 accepting the delivery of Bill XXXIII and Bill XXXIV from Stacy Bonus who donated them to the Academy.

All content from Kiddle encyclopedia articles (including the article images and facts) can be freely used under Attribution-ShareAlike license, unless stated otherwise. Cite this article:
Bill the Goat Facts for Kids. Kiddle Encyclopedia.