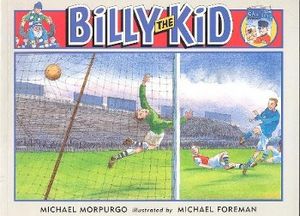 Billy the Kid is a children's novel by the English author Michael Morpurgo, first published in 2000.

Billy, an 80-year-old Chelsea Pensioner, looks back on his life. As a boy he loved football and was chosen to play for Chelsea Football Club. His youthful brilliance earned him the nickname of "Billy the Kid". Then his life was interrupted by the start of the Second World War and Billy joined the army. When he returned home, injured, he found that his home had been bombed and all his family killed.

He became a vagrant but was later befriended by a family and encouraged their son Sam to play football. Sam grew up to play for Chelsea also.

All content from Kiddle encyclopedia articles (including the article images and facts) can be freely used under Attribution-ShareAlike license, unless stated otherwise. Cite this article:
Billy the Kid (novel) Facts for Kids. Kiddle Encyclopedia.