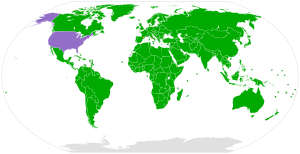 Green = signed and ratifiedViolet = signed but not ratified Orange = no signature

The Convention on Biological Diversity is a treaty created from signature at Rio Summit on 1992. The Last Conference of Parties took place at Sharm-El Sheikh in Egypt on 2018.

All content from Kiddle encyclopedia articles (including the article images and facts) can be freely used under Attribution-ShareAlike license, unless stated otherwise. Cite this article:
Biodiversity Convention Facts for Kids. Kiddle Encyclopedia.