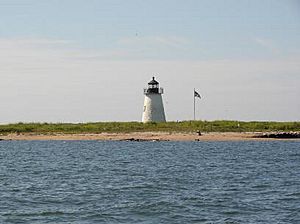 Bird Island is a tiny island in Buzzards Bay at the mouth of Sippican Harbor, less than a mile off the mainland coast of the town of Marion, Massachusetts, United States.

The only landmarks on Bird Island are a flagpole and a historic 36-foot-high (11 m) lighthouse. Bird Island Light was formerly manned but now runs automatically. The Great New England Hurricane caused widespread destruction all along the south coast of New England. High tide in the evening of September 21, 1938, was 14 feet (4.3 m) above normal. The great storm swept away every building on Bird Island except the lighthouse tower.

Bird Island is notable as a sanctuary and major breeding ground of the roseate tern, a bird from which the island gained its name.

All content from Kiddle encyclopedia articles (including the article images and facts) can be freely used under Attribution-ShareAlike license, unless stated otherwise. Cite this article:
Bird Island (Massachusetts) Facts for Kids. Kiddle Encyclopedia.