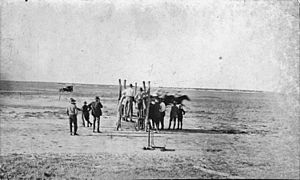 Horses flying past on the Birdsville Racetrack, circa 1926

The Birdsville Races are horse races held each year in September in the Queensland, Australia, town of Birdsville. Funds are raised in aid of the Royal Flying Doctor Service of Australia. The population is swelled from about 100 to around 7,000 people for the two-day event.

As Birdsville is very remote, many travellers come by air and hundreds of aircraft fill the town's airstrip. The town of Quilpie celebrates the event by welcoming travellers who are heading westwards to Birdsville by road.

In 2009 as part of the Q150 celebrations, the Birdsville Races were announced as one of the Q150 Icons of Queensland for its role as an "event and festival".

The first races were run in the town in 1882. The club that convened the meeting was originally called the Birdsville Amateur Turf Club. It later changed to the Diamantina Amateur Race Club as it also convened the Betoota race meeting. In 1990 it separated from Betoota and became the Birdsville Race Club Incorporated.

The 2007 races were affected by a national outbreak of horse flu. The 2009 event attracted a crowd estimated at around 7,000, requiring 20 extra police to be temporarily posted to the small town. The 2010 races were cancelled for only the third time in the events history, and the first time due to flooding; this did not prevent visitors partying, and betting on 'phantom' races. 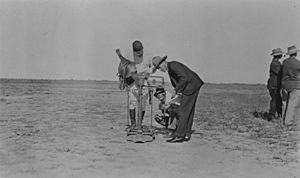 Weighing in at the Birdsville Races Queensland, circa 1926

In the past the Birdsville races have included:

All content from Kiddle encyclopedia articles (including the article images and facts) can be freely used under Attribution-ShareAlike license, unless stated otherwise. Cite this article:
Birdsville Races Facts for Kids. Kiddle Encyclopedia.