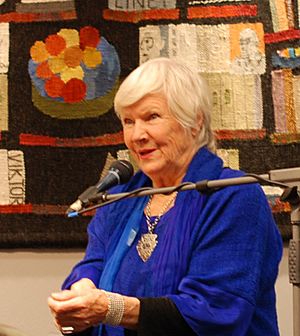 Stenberg was born in Stockholm in 1932. She was educated in Visby and finally in Paris. She became a Swedish author, translator and illustrator. She lived in Åstol in Sweden. She has won the Swedish Selma Lagerlöf Prize for literature in 2005.

All content from Kiddle encyclopedia articles (including the article images and facts) can be freely used under Attribution-ShareAlike license, unless stated otherwise. Cite this article:
Birgitta Stenberg Facts for Kids. Kiddle Encyclopedia.