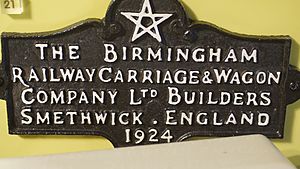 This BRCW makers plate is on display in Thinktank, Birmingham Science Museum.

The Birmingham Railway Carriage and Wagon Company (BRC&W) was a railway locomotive and carriage builder, founded in Birmingham, England. For most of its existence, it was at nearby Smethwick, with the factory divided by the boundary between the two places. The company was established in 1854.

All content from Kiddle encyclopedia articles (including the article images and facts) can be freely used under Attribution-ShareAlike license, unless stated otherwise. Cite this article:
Birmingham Railway Carriage and Wagon Company Facts for Kids. Kiddle Encyclopedia.