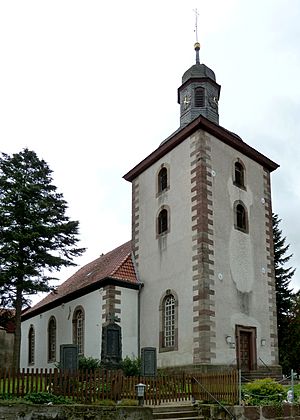 Bischhausen is a village in southern Lower Saxony, Germany. In December of 2010, 371 people lived in the village (as of May 4, 2015). It is near the previous border with what was the German Democratic Republic (East Germany). The castle ruins called the Gleichen are on two small mountains near the village. Almost all the working people who live in the village are farmers or work in the city of Göttingen, which is not far away. There is one church: the Lutheran church of St. Martin.

The mayor is Michael Dusch.

All content from Kiddle encyclopedia articles (including the article images and facts) can be freely used under Attribution-ShareAlike license, unless stated otherwise. Cite this article:
Bischhausen Facts for Kids. Kiddle Encyclopedia.